Peer Webinar is a novel initiative taken by the Department of English as an attempt to encourage academic dialogue and widen research perspectives amongst the members of the faculty in the department of English. The final semester students of M.A English are also included as audience in order to encourage research aptitude and familiarize them with research methodology. As a part of this ongoing regular process, the Department organizes a peer webinar each month where a member of the faculty presents their research paper in front of the other teachers of the Department and the final semester students of M.A English.

The sixth chapter of the departmental Peer Webinar was organized by the Department of English, The Bhawanipur Education Society College on 22.04.2022 from 7.00 p.m. In this session, Dr. Gargi Talapatra, Assistant Professor, Department of English, delivered a presentation entitled “Khoob Ladi Mardaani: The Enigmatic Life of a Subalternized Queen”. A critic, creative writer and translator, Dr. Talapatra’s works have been published in various academic journals and books of repute. Some of her recent publications include ‘The Tempest: Through the lens of Natya Shastra’ – an article published in Kalakalpa, the Journal of Arts published by the Indira Gandhi National Centre for the Arts in 2019 and ‘William Faulkner: The Sound and the Fury’ – an article published in a book entitled The American Novel from Hawthorne to Heller: Cultural Contexts and Critical Perspectives by MacMillan India Pvt Ltd in 2020. Her areas of research interest include Indian literatures, postcolonial literature, gender studies, subaltern studies and cultural studies. 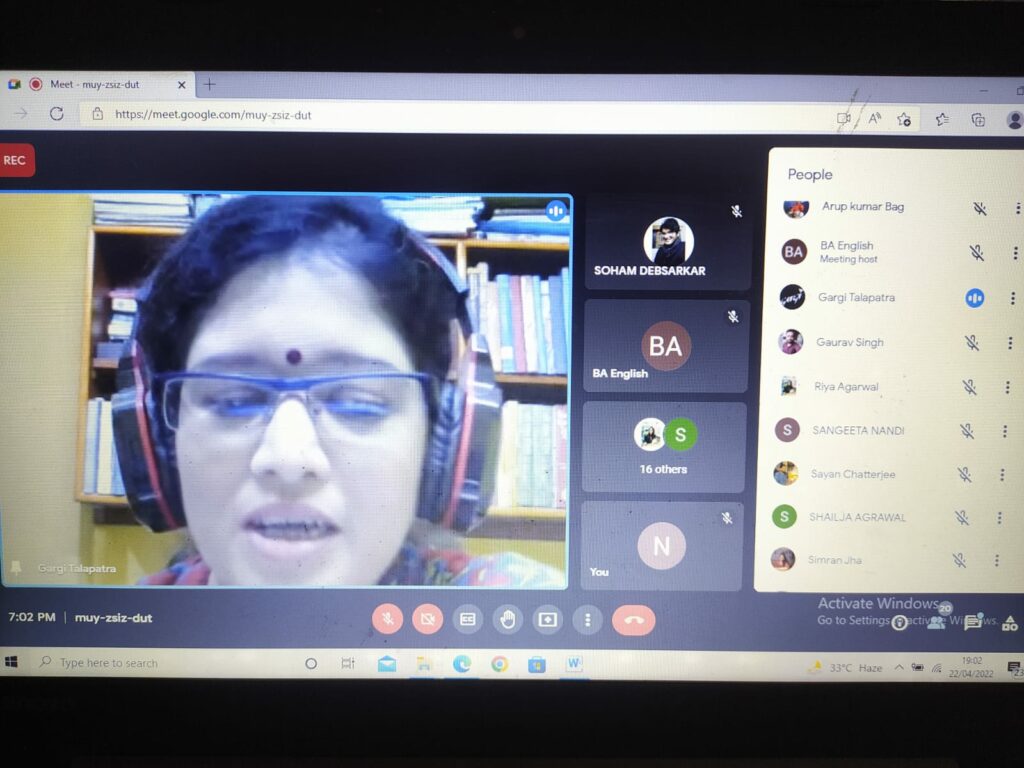 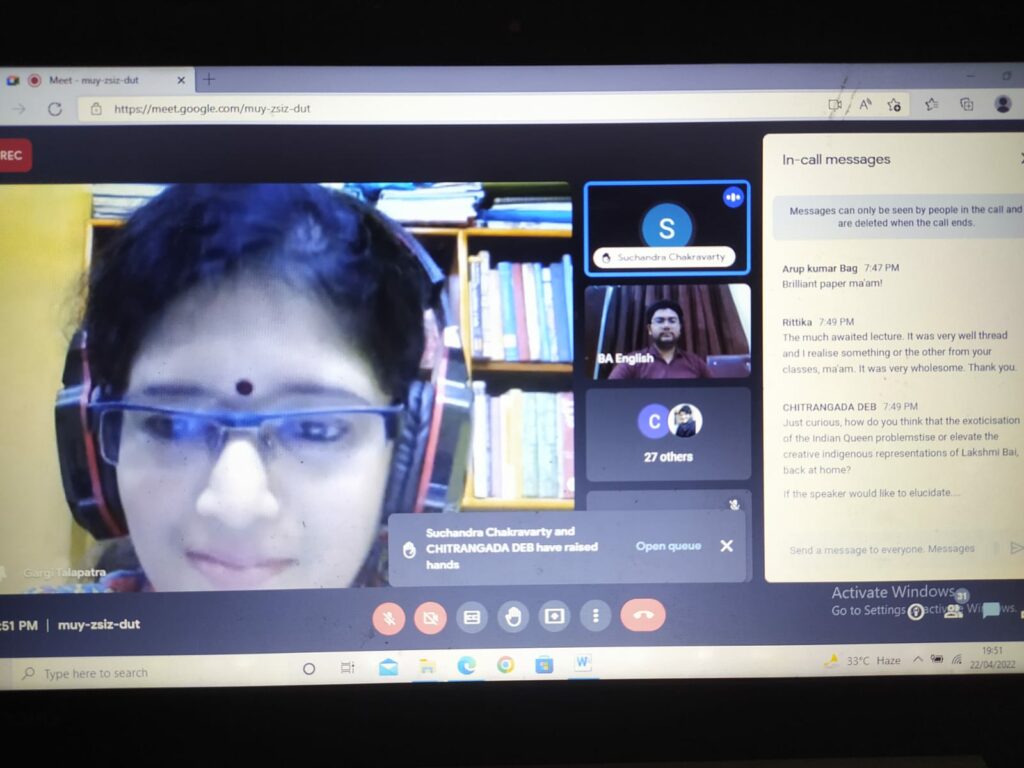 Dr. Talapatra started her presentation with how the Uprising of 1857 has been institutionalized in the collective unconscious of the Indian nation as the first war of Indian independence and from amongst the heroes associated with this episode of history, chose to elaborate on Rani Lakshhmibai. Remembered for her heroic resistance against the British invasion of Jhansi, Rani Lakshmibai stands out in this historical episode for the glorious defiance of her gender role by asserting her presence on the battlefield. Subsequently, she has been the subject matter for literary imagination – both in India and England, for almost two centuries. Dr. Talapatra’s paper provided an elaborate critique a few such literary representations to show how literary perspectives around historical episodes and figures change with the passage of time and how, particularly, the Rani of Jhansi has been repeatedly represented to merge with the cultural symbol of the iconic Indian woman through these representations.

The literary works critiqued by the speaker included novels, poetry and plays from both, the English as well as the Indian points of view throughout the 19th and 20th centuries, until the present. Through her presentation, Dr. Talapatra tried to convey how these representations have changed in their character across the colonial, postcolonial, feminist and diasporic ages of existence, in the process, also changing the larger narrative of the life of Rani Lakshmibai as not just the rebel queen but the individual who went on to become a cultural icon for the nation. She concluded by referring to this process of individual articulations as imagined by the literary works and claimed this phenomenon to be a systematic process investigating into the cracks and fissures of history to relocate the individual utterances obliterated by institutionalized history.

The webinar was followed by an interesting interactive session involving the students as well as the teachers of the Department. Many interesting inputs and observations were made by Prof. Debjani Ganguly, Vice Principal (Arts). The webinar was conducted through the GSuite for Education made available by the College and was moderated by Prof. Soumyajit Chandra.