The Bhawanipur Education Society College tops the list for organising the maximum number of events that are aimed at exposing the students to every conceivable skill-sets that they may imbibe to leapfrog forward, even consider as a career option. Naturally, each event needs in its wake a report to be prepared, reports that are not only given due coverage in the official media of the college but are also an invaluable tool for those who want to hone their writing and reporting skills. What is more, such students are routinely mentored and coached so that they may not only excel in their chosen fields but are also provided with a holistic view so that they may enrich their writing with the kind of information and insight that such writings demand.

A workshop was conducted by Suvobrata Ganguly, a working journalist and writer to further this cause of the wilders of the pen, which was attended by twenty handpicked students, who have also been selected to perform the onerous task of reporting on the different events of Umang, the annual college fest. 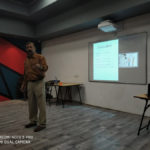 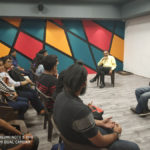 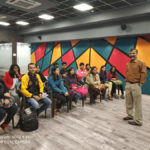 The speaker emphasised on bringing out the potential reporter in every student that attended the workshop and suggested effective tips in order to write an efficient and unbiased report. It was a follow up session on the Report Writing held on the 20thNovember 2018 and naturally went into greater details on the art of writing the perfect report.

The workshop was a fun learning experience for the students. The speaker was interactive in his deliberations and was open to all sorts of questions and opinions, carrying the audience with him as opposed to overwhelming it with his narrative. Students were introduced to the standard format of a newspaper, various sources of getting the information that finds placer in the media, the hierarchy of reporters in a publishing house, the cardinal rules that have to be followed religiously while writing a report and also dwelled at length on the reasons for the decline of newspapers and the change in our reading habits. The session was followed by a Question and Answer Round where students in the audience asked questions related to the topic and were answered instantly – the speaker delving deep into the pool of his rich and varied experience, often highlighted by anecdotes which made the entire session not only enriching but also extremely enjoyable.