Karsan Ghavri opening India’s bowling attack with Kapil Dev, was once a regular feature in the Test cricketing circuit.

Known equally for his near lethal deliveries, handsome looks, congenial nature and sportsmanship, it was natural that the students would give him a rousing welcome, and they did, when he visited the Bhawanipur Education Society College (BESC) on March the twenty third.

But the warmth and the spontaneity with which the cricket crazy students of the BESC celebrated his
presence was overwhelming, even for Ghavri. 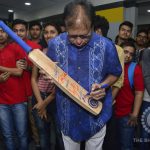 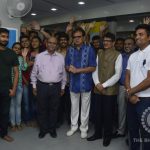 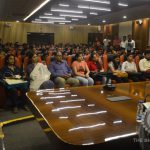 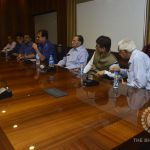 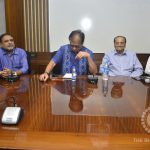 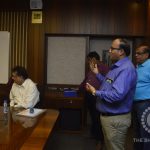 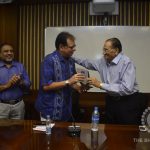 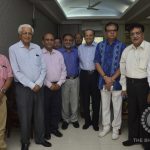 Champaklal Doshi, the Chairman of the Governing Board of BESC, along with Committee Members Jitu Shah, Arvind Rupani, Umesh Thakkar and donor representative Viren Mehta where present to greet him along with Prof Dilip Shah, the Dean of Student Affairs of the College.

Dr. Divyesh Shah, Prof Minikshi Chaturvedi and some other members of the faculty were also present on the occasion at the Society Hall of the College, which was, as expected, jampacked with students.

His visit started with the sports arena where he met some college students and also tried his hand at the snooker table.

Later, he smashed and zapped the present students with his top-spinners on the TT board.

“If the state of Indian cricket today, were to be compared to a skyscraper, whose commanding heights overawe us, then we must acknowledge the solid foundations on which it is built” began Prof Dilip Shah in his characteristic manner, presenting Karsan Ghavri to the audience as “one of the men, who had, with sheer grit gone about building the fundamentals on which Indian cricket continues to flourish”.

He then rattled off numbers from Ghavri’s exciting cricket career, putting things in perspective as it were, as most of the students present in the auditorium filling their senses with the living legend, were not even born when Ghavri was bowling his lethal fast-medium pacers.

Ghavri, who took the microphone made it a point to record his amazed happiness at the level of interest shown by the students and after a few customary platitudes, threw the session open, requesting questions from the audience.

The one question that brought vintage Ghavri back to the fore related to the peculiar situation faced by most sportspeople, when they have to battle against vitiated (read biased) umpiring.

“What do we do” asked the student “do we too compromise our sportsman’s spirit for the sake of victory that
is the end in itself”? Ghavri, who represented an era when cricket was still (?) a “gentleman’s game” was categorical in his answer: “it is natural for the home team to have an advantage.

One acknowledges that and trives for victory, without compromising on one’s resolve to play a fair game”.

He also highlighted his point by referring to a particular incident from test cricket when in 1966 Budhi Kundran was
given out by the umpire in a match between India and the West Indies being played at the Brabourne Stadium.

Sir Garfield Sobers, who had taken the catch, had called back the batsman, stating that the catch was not taken cleanly.

He also talked of an experience from the other end of the spectrum that took place in Karachi and involved Mushtak Mohmmad and Shakoor Rana, who was known as a great Umpire – for the Pakistan Team.

“The outcome of the game is not what matters”, he said, “in the final analysis, what matters was how the game was played”.

And that is why, the world remembers and will continue to remember the likes of Sir Gary Sobers, Gundappa
Ranganath Vishwanath and Adam Gilchrist for ever.

He also answered a number of questions from the audience that covered almost all aspects of the great game of uncertainties, often giving invaluable life lessons to the students through his simple and honest answers.

Champaklal Doshi, the Chairman of the Governing Board of BESC, felicitated the cricketing legend with a memento on behalf of the college.

A left-arm fast-medium pace bowler, with a long run-up and a high leaping action, he could also produce quickish but accurate left-arm finger spin.

With the bat he was usually found in the lower order but managed a couple of Test half centuries including a career best 86 against Australia in Bombay.

By the time he was dismissed he had made a record eighth-wicket partnership of 127 with Syed Kirmani.