The Department of English organized a series of Fortnightly Lectures on Literary Theory for the final semester students of the Undergraduate and the Postgraduate courses, in March-April 2022. This was planned to ensure that the students are equipped with advanced knowledge of literary theory and criticism as several of them would, after their final semester, be appearing for entrance examinations for M.A and also conducting research.

The first lecture in this Fortnightly Series, entitled “Literary Theory: An Introduction” was held on 2nd March 2022. It was delivered by Pramantha Mohun Tagore, who is a joint-doctoral candidate at the Sir Zelman Cowen School of Music, Monash University, and the Department of Humanities and Social Sciences, IIT-Bombay. Pramantha has written about a broad range of topics including Shakespearean Tragedy; Film and Literature; and Hindustani Music. His latest chapter on “Museums in Kolkata and Shantiniketan” has been published in the Routledge series, Sound Heritage (2021). At present, Pramantha is based at the University of Chicago as a Fulbright Visiting Research Fellow. 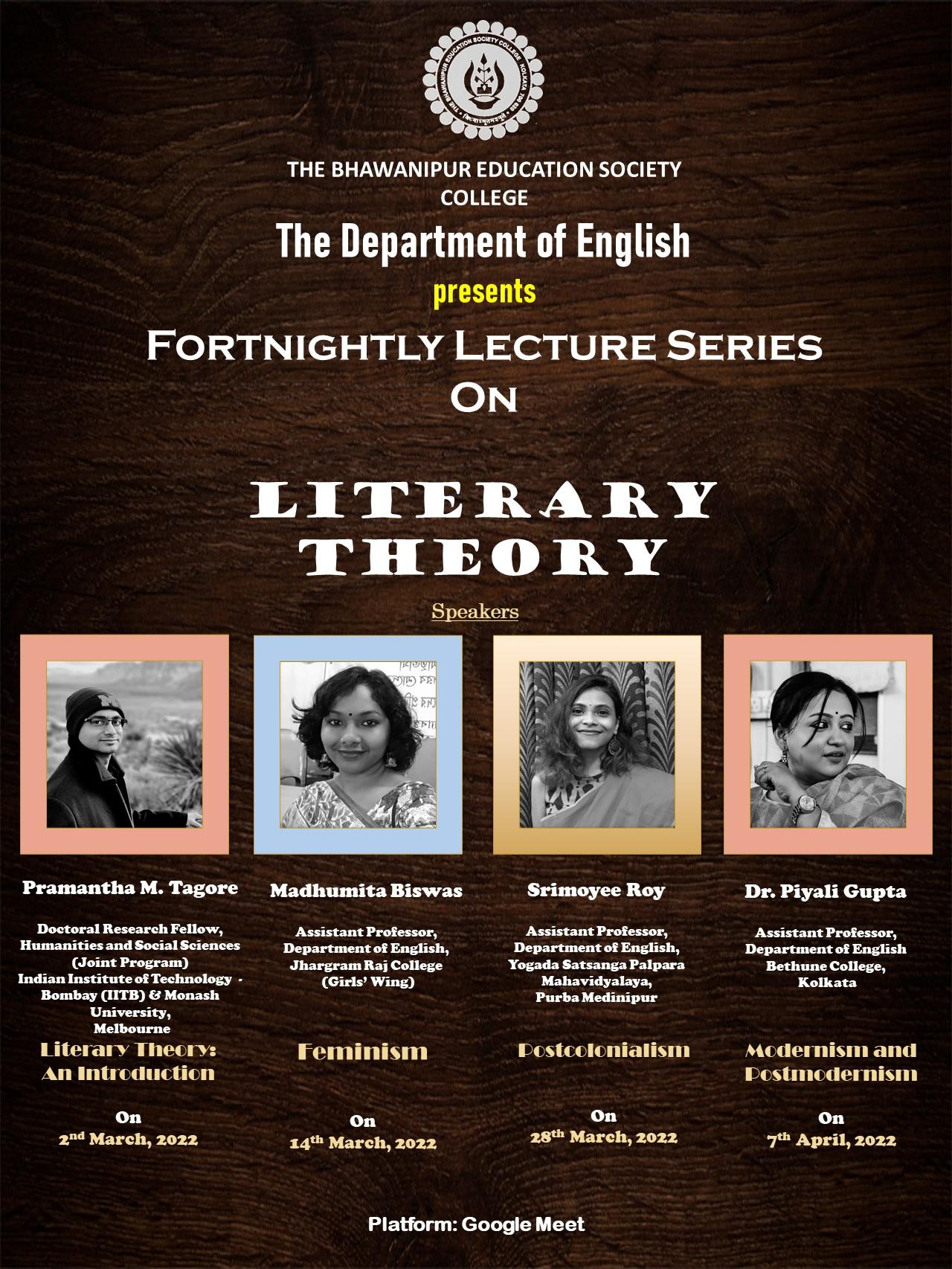 Pramantha Mohun Tagore started his lecture by referring to the outbreak of civil war in France in 1968. Popularly known as May ’68, the period is remembered through the graffiti on the wall, which read anti-establishment slogans. These protests as studied by scholars later shows an exponential increase in the student population as a profound outcome of the Second World War, which, in turn, led to a very different class profile from the social elites who attended universities before the Second World War. In this changed scenario, students and workers came together to create barricades and resist the University authorities. Many intellectuals participated in these events as students, including Jacques Derrida and Michel Foucault. The lecture traced the probable connections between these scenes of violence and literary theory. Tracing the etymological origins of ‘theory’, Mr. Tagore defined it as a conceptual basis of a subject or area of study, as opposed to the more practical side provided by literary criticism. Literary theory is concerned with description, analysis, speculation and interpretation and originates outside the domains of literary studies. The changed fabric of the students’ population after the Second World War led to a discarding of the old conventional techniques of reading literature, and consequently resulted in the emergence of literary schools of theory such as post-structuralism and Deconstruction. Socially situating the backdrop of the emergence of literary theory in the late 20th century, Mr. Tagore concluded his talk by observing that literary works are more than creative artefacts; they respond to the social and cultural world around us. 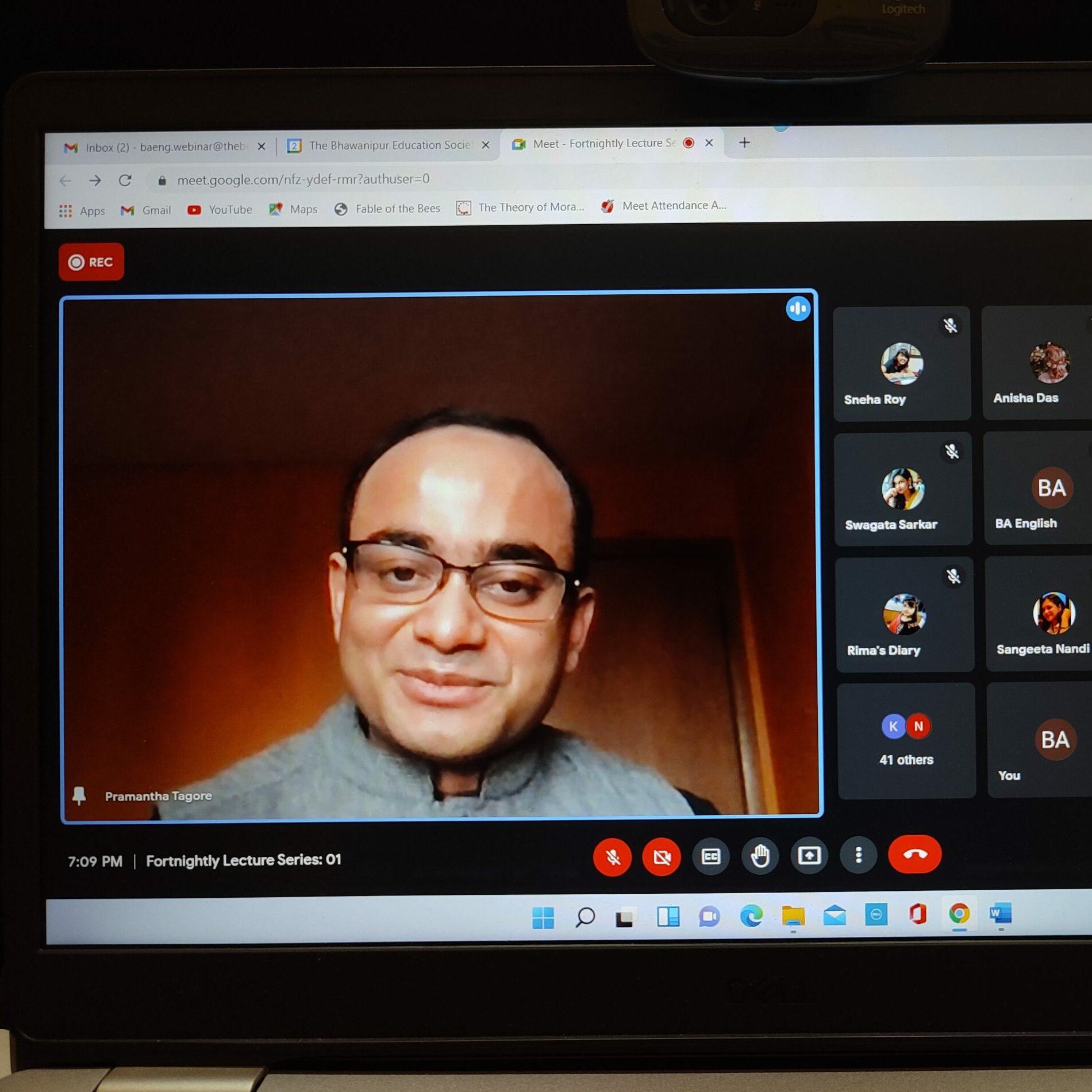 The second lecture in this series was delivered by Madhumita Biswas on Feminisms on 14th March 2022. Madhumita Biswas is an Assistant Professor, Department of English, Jhargram Raj College (Girls’ Wing). She did her graduation and Master’s from Presidency University, Kolkata and her MPhil from the University of Calcutta. She has several book chapters to her name and has also co-edited a book titled Indian Writing in English: A Reassessment. Her areas of interest are Feminism, African American Literature and Indian Writing in English. Prof. Biswas began her lecture by referring to the common misconceptions associated with the term feminism and the social stigma which is deliberately constructed around it by the dominant patriarchal attitudes in the society. Through a very informative presentation, she shared with the students the actual evolution of the term feminism and explained how the activist and academic aspects of theorization gradually came to complement each other through the three waves of feminism. Referring to the well-known writers and theorists such as Virginia Woolf and Simone de Beauvoir, Prof. Biswas explained the emerging perspectives in feminism throughout the 20th century to the students by continuously referring to the known facts of their own society. She explained the concept of literariness associated with feminist perspectives of literary works with special reference to Elaine Showalter and the concept of Gynocriticism. She also familiarised the students with the development of third world feminism and acquainted them with the essential plurality embedded in the term. Relating the theoretical and literary concepts associated with feminism with the familiar realities of everyday existence, Prof Biswas mesmerized the students with her clarity and in-depth analysis of the topic. 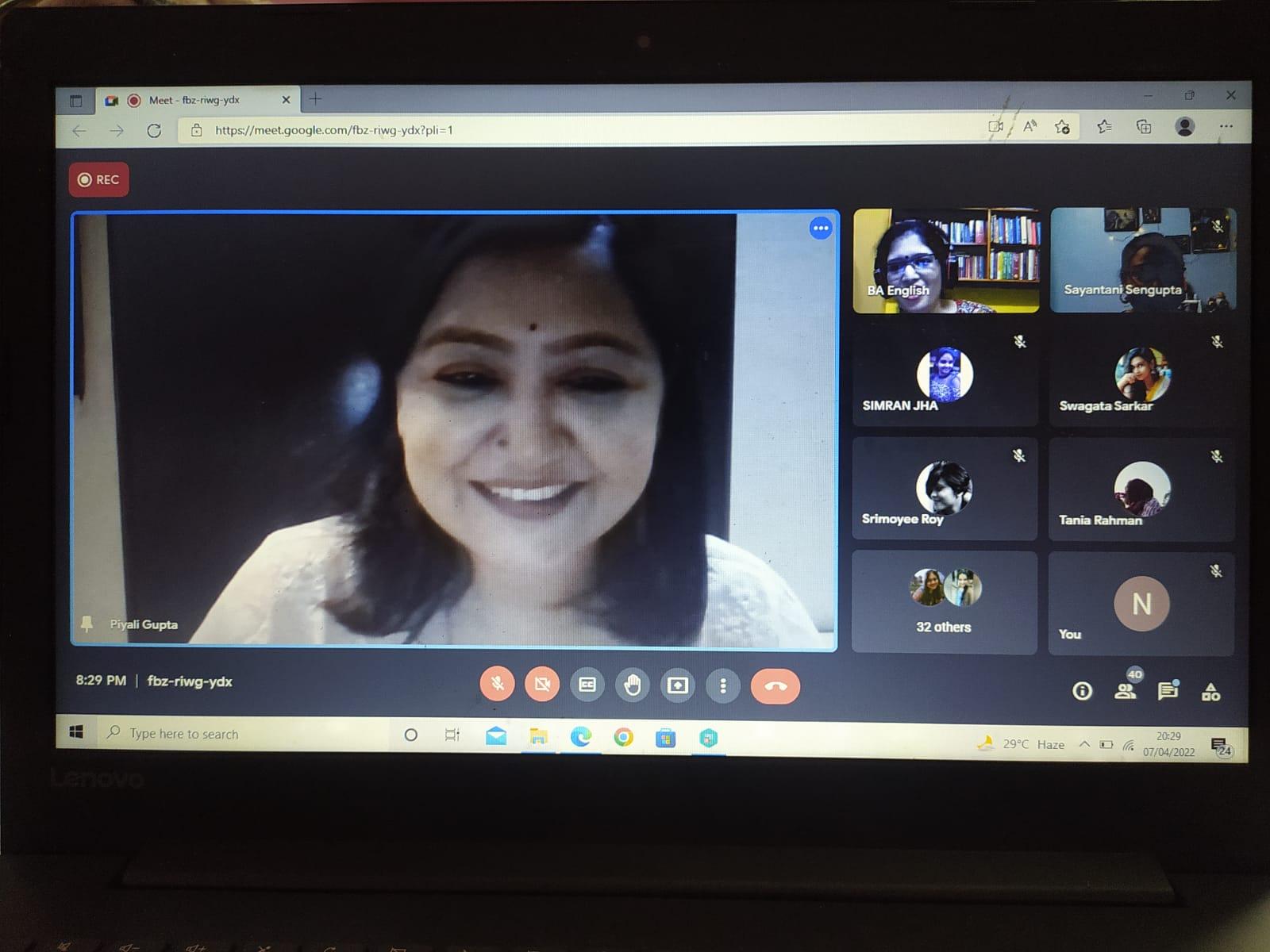 The third lecture in this series was delivered by Srimoyee Roy on Postcolonialism on 28th March 2022. Srimoyee Roy is an Assistant Professor, Department of English, Yogada Satsanga Palpara Mahavidyalaya, Purba Medinipur. Srimoyee Roy is a scholar of English who completed her M.A. from The English and Foreign Languages University, Hyderabad (2016), and her M.Phil from the University of Calcutta (2018), on the humanism of the Medieval Indian Saint Poets and of Rabindranath Tagore. Her areas of research include studies on Blues music, anime, graphic novels. Of late, she has also taken interest in memory studies. Prof. Roy introduced the students to the concept of Postcolonialism, dating back to the colonial times and tracing the developments which went into the evolution of the postcolonial subject. She elaborated on how the entire paradigm constituting knowledge was channelized by the colonial authorities to enable the ideation of the colonized subject ad the diametric opposite of Eurocentric civilization. She referred to the gradual rise of postcolonialism as a theoretical perspective after the Second World War as the intellectuals from the formerly colonized nations revisited the colonial representations and interrogated the colonial perspectives. In this regard, she led the students through a thorough recapitulation of postcolonial theories by Frantz Fanon and Orientalism by Edward Said, which largely shaped the direction of the postcolonial inquiries in the later 20th century. She also familiarized the students with the later postcolonial concepts such as those formulated by Homi Bhabha. Prof. Roy engaged the students with novel insights into postcolonial approaches and enabled them to apply the same to the texts included in their syllabus.
The fourth and final lecture in this series was delivered by Dr. Piyali Gupta on Modernism and Postmodernism on 07th April 2022. Dr. Gupta is Assistant Professor (WBES), currently posted in the Postgraduate Department of English, Bethune College. She has previously worked in Chandernagore College and has postgraduate teaching experience at the Department of English, University of Calcutta, Presidency University (erstwhile college) and Maulana Azad College. For her academic record of having secured the First rank in B.A. (Honours), M.A. and M.Phil Examinations at the University of Calcutta, she has been awarded the Gold Medal (from C.U.), National Scholarship, Swati Bose Memorial Scholarship (from C.U.) and was also nominated for the President of India’s Gold Medal for General Proficiency in 2007. She has completed the Diplôme de la langue in French from L’Alliance Française, Kolkata. Her doctoral dissertation was on actress autobiographies. Her research interests include Gender Studies, Victorian Literature and women’s autobiographies. She has completed a UGC Minor Research Project on the intersection between disability and life writing and has published papers in several reputed journals and books.
Dr. Piyali Gupta took the students through the conceptual evolution of Modernism and Postmodernism, carefully delineating the similarities and differences between the two with the help of a presentation. Defining the term ‘modern’, Dr. Gupta dated the beginnings of Modernism in literature to the late 19th century, which continued till the 1940s before the beginning pf Postmodernism. She shared with the students a glimpse of Pablo Picasso’s Guernica, painted in 1937, which depicts a world in fragments. She associated this vision with literary representations, tracing a journey through the literary works of T.S Eliot, James Joyce and W.B Yeats. Having familiarized the students with the tenets of Modernism, she introduced them to Postmodernism where the chaos and disorder continue to acquire different shades of representation in the hands of the literary artists. She differentiated between the two stating that while Modernism tried to create a structure despite the chaos and anarchy, Postmodernism does not attempt to do so. The anarchy of the contemporary world is unstructured in postmodernism. She illustrated her point with reference to Jean-Francois Lyotard, Jacque Derrida and Italo Calvino. Dr. Gupta concluded her lecture by a practical illustration of the difference between Modernism and Postmodernism with reference to Virginia Woolf’s ‘Letter to a Young Poet’ and Danil Ivanovich Kharms’ ‘The Red Haired Man’. 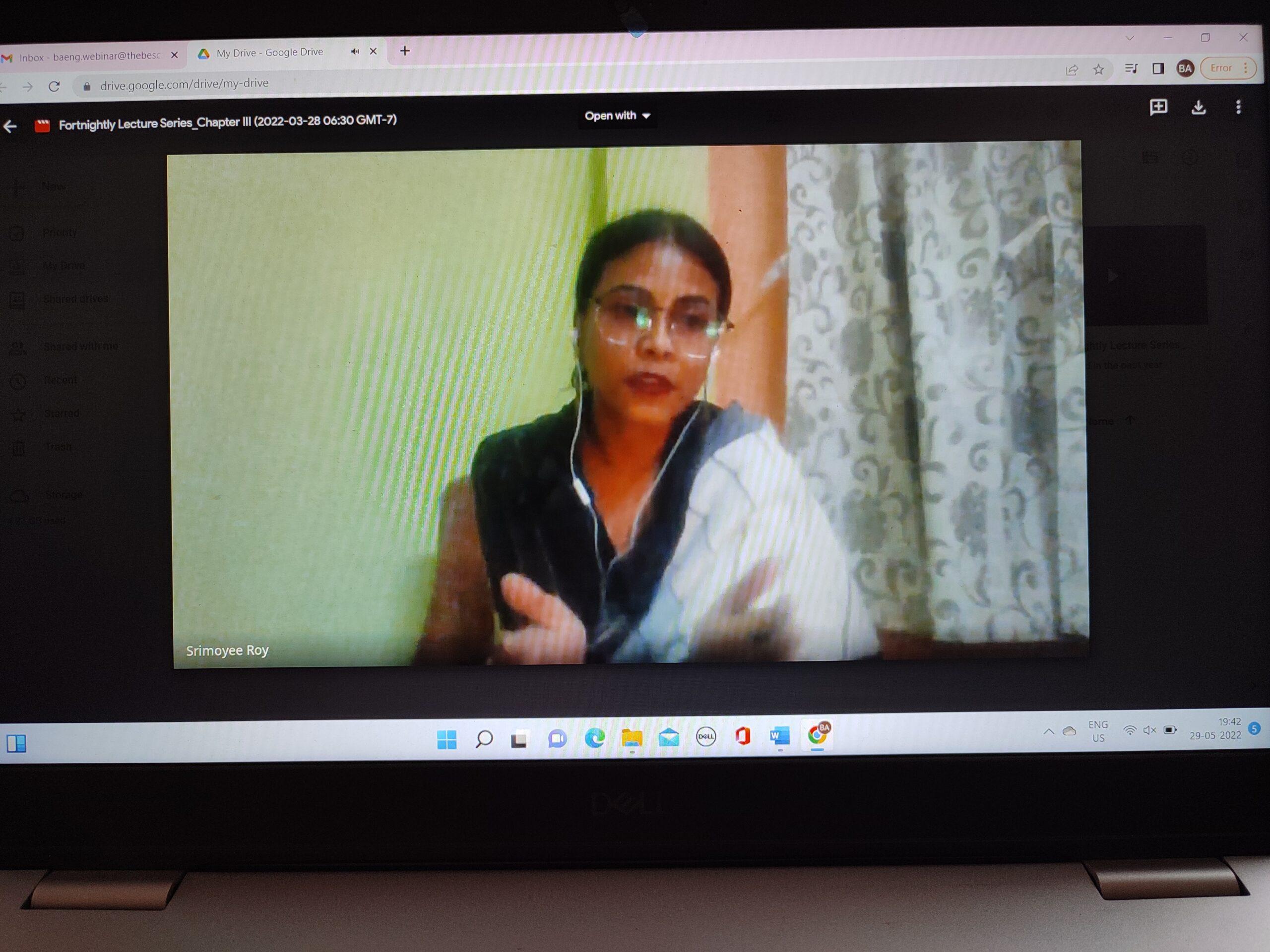 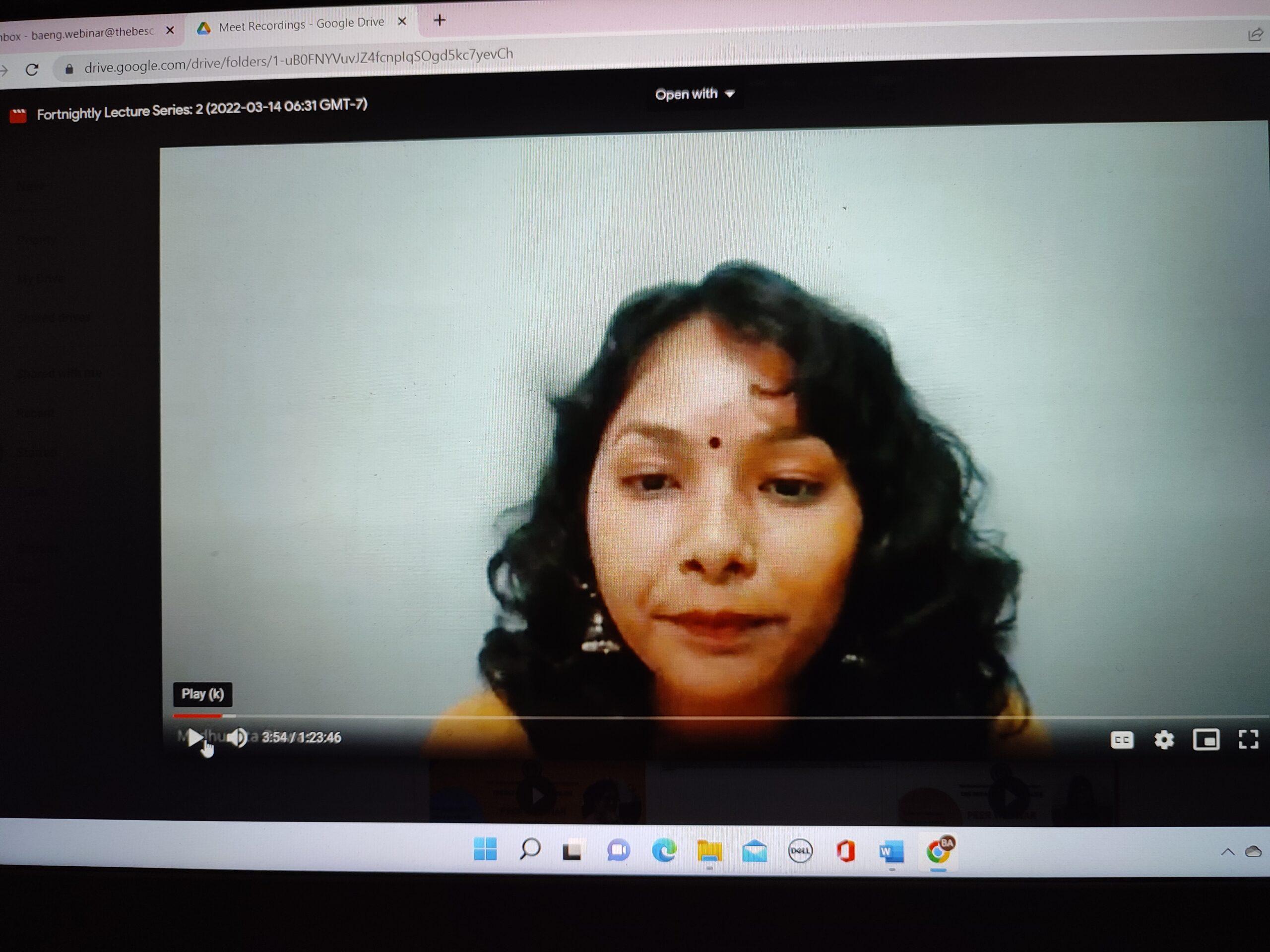 All these four lectures were organized on Google Meet through the GSuite account made available by the College. The lectures have been recorded for future use. This lecture series on Literary Theory – the first of its kind, organised by the Department of English was much appreciated by the students at the undergraduate as well as the postgraduate levels. After the completion of the series, feedback forms were sent to the student participants for departmental record.