Prof Parimal Merchant is a Director in the SP Jain Institute of Management, one of the most sought-after sanctuaries for getting entry into the coveted world of MBA’s. That the Mumbai based institute has campuses in Dubai, Singapore and Sydney being vindication enough of its stature and popularity among student fraternity. However, is it not the association with the institution alone that makes Parimal Merchant who he is – for, he is an expert on the many facets of family businesses, having dedicated his life’s work to unravelling the mysteries behind the working of this unique form of business organisation.

“Come with your parents” he had sounded the clarion call and BESC students had responded, doting dad’s in tow. They went back thoroughly chastised, lauded occasionally, but enlightened, none the less. 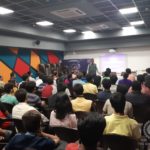 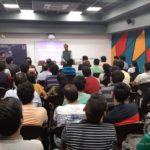 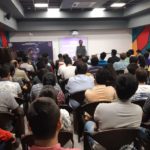 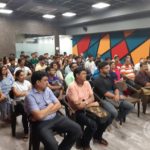 For, when Parimal Merchant starts talking, the world listens – fascinated by his deep insight in matters organisational, enamoured by the anecdotes which he sprinkles on his brilliant discourse. And he has a wealth of knowledge to share especially in matters of family fortunes, the ways of making, breaking and guarding them having witnessed myriad cases from close quarters apart from acting as an external consultant to many.

The newly constructed auditorium on the sixth floor of the college was choc-a-bloc and the key takeaway from the session – don’t run after the chimeras when the pot of gold (call it a wealth of knowledge, experience, resources, whatever) is there within the family, was one that had impressed parents nodding in approval. The students, well, it had them thinking.

Prof Merchant was felicitated by Prof Dilip Shah, the Dean of student affairs of the Bhawanipur Education Society College (BESC) which was followed by a one on one, when parents and students were provided with the opportunity of addressing their concerns to Prof Merchant directly, who not only heard them out patiently but also provided them with the answers they were seeking.

The event was followed by a further session of informal interactions as the guests and the speakers met over light refreshments organised by the college.

(This report has been filed by Nikita Mittal along with camera person Shreyanshu Mishra of the Expressions collective of the BESC.)