As part of the Amrit Mahotsava celebrating the seventy-fifth year of India’s independence, the Department of History, The Bhawanipur Education Society College, organized an international webinar on 5th May, 2022. The webinar was entitled, “Scripting the Birth of a Nation: India’s Role in the Liberation of Bangladesh” and it was delivered by three mukti joddhas (freedom fighters). The speakers, Mr. Abu Mohammad Golam Kabir, Rev. James Gain and Mr. Parimal Ghosh, joined us via Google meet from Barisal while students and audience congregated in the 2nd floor auditorium where the talk was broadcast live.

The webinar commenced at 11 am with a welcome address and a background of the history of the liberation struggle by the Vice-Principal of the Arts Section, Prof. Debjani Ganguly. Thus began a two and half hour long discussion with our esteemed speakers who shared with us their personal experiences of the war and the factors motivating them to participate in the liberation war. The discussion also included the role of Indian army in training the combatants in their war against the West Pakistani army and the substantial role the then Government of India played in liberating their nation. The conversation also encompassed topics like the role of women combatants in the war, a much neglected though crucial topic.

A question answer session followed post which the Head of Department delivered the vote of thanks. Students of semesters 2, 4 and 6 of the History department and faculty members of other departments had joined us for the webinar. 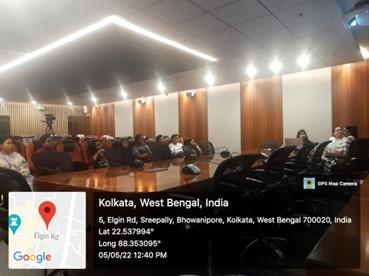