The Department of Education organized an Educational Tour to Akashwani Bhawan on 5th December 2022. Since we were asked to reach Akashwani Bhawan at a later hour, we started our journey in the morning by visiting the Alipore Zoo. So, it was a combination of an excursion and an educational programme.

As a part of Education Generic Semester 3 syllabus, Radio is included as one of the important agencies of Education. Radio exercises a great educative influence upon the individuals ceaselessly throughout their lives.  It has proved to be one of the most efficacious means for socializing, acculturation, and knowledge diffusion in the modern world. Radio is the most inexpensive scientific device that functions as an effective auditory instrument for communication. It also plays an important role in educating the entire population, even reaching out to the remotest areas. It is not only informing, but also inspires human being for learning more and more. It can cover a wide area at the same time.

Keeping this is mind it was decided to orient our students towards the functionalities of a Radio station. 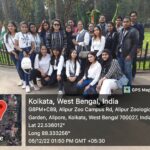 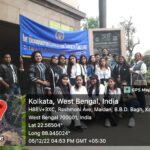 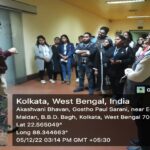 All India Radio (AIR), a branch of Prasar Bharati, is the national public radio broadcaster of India. It has been formally known as Akashvani since 1957, which in Sanskrit it means “Voice from the Sky.” It started back in 1936. The Akashwani Bhawan has got several departments working in a synchronised manner, dedicated solely towards knowledge transmission and entertainment for the entire population. Our students were guided by Programme Head, Mr. Subhayan Bala and his team. Students were first oriented regarding the several stations that function under Akashwani Bhawan. They were taken to the archival record room where they were shown how they have maintained interviews of imminent dignitaries in cassettes of 5 inches (Duration-20 Minutes), 7 inches (Duration-30 Minutes) and 10 inches (Duration-1 hour). One such cassette was played on the tape player where our students heard a 15-minute conversation of Nelson Mandela dating back to 1990. Besides, we saw the Master Control Room where the technical team revealed the processes involved in ensuring the final tonal output being catered to the greater audience without any technical glitch. Amongst the other technical sections, students were exposed to two kinds of acoustic rooms, first was the Indian Classical Room and the next was the Western Music Room. Mr. Subhayan Bala explicated how each of these rooms were structured differently as per the sound modulations and types of musical instruments being played there. Our students also witnessed a live talk show getting on air where Mr Subhayan demonstrated how with an equaliser, the pitch and sound is maintained. Our students were delighted to get the opportunity speaking over the microphone in one of their talk studios. Dr Rekha Nariwal, Associate Professor and Sayandita Deb Roy, College Whole Time Teacher, Department of Education also had an opportunity to be a part of the talk studio. In a nutshell. the students through this educational excursion ultimately discovered the technical aspect of Radio and how the support team plays a quintessential role in broadcasting the programmes. Lastly, Mr Subhayan took our students to the  live broadcasting room of FM Rainbow, where students were amazed to see RJ Mahua connecting with the audience. She displayed how one could “create a hook” between each of the songs being played by sharing interesting stories and getting the audience intrigued to know more about it. The tour ended by capturing a moment with the entire team of Akashwani Bhawan with the students and the faculty members.