The question of the millennium… a matter of superiority… Angels or Demons? This has long been left unanswered, but fortunately we have a way to find out. The Bhawanipur College’s fest i.e. UMANG’14: ANGELS vs. DEMONS has provided the conflicting sides a battlefield to finally prove their mettle. Fifty events will be held to draw out the true victors. We do not know which side will in the end prevail but we can assert ourselves that this battle will be legendary and more importantly exciting to judge and witness.

From performing arts to extreme digital car racing, we have events that will please spectators of any and every versatile genre preferences. Some of the key or “spot light” events that need mention are the Bhawanipur Idol, War of the DJ’s, Stand Up Comic, Fashion show and many more. This recount would be worthless if it did not mention the inaugural ceremony. This year Dr. Kusum Khemani was invited as the chief guest and along with the governing body of the college, the inaugural ceremony was signified with the lighting of the hopefully ever glowing lamp. The college situated at the heart of Kolkata has been organizing this fest for nearly two decades.  Inspired by the growing popularity, The Bhawanipur College has decided to add another feather to the cap and take a daring leap with more events to organize Umang’14: Angels vs. Demons.

If we are concluding the fest with a mind blowing band like Agnee, you can be rest assured that the inaugural ceremony will be no less exciting. And taking about excitement, the host of the event was none other that R.J. Rio who proudly labels The Bhawanipur College as his Alma Mater.  ‘We feel that breath of winter whispering to us that God created everything good because God, in his Holiness cannot create something sinful or… can he?’ with these words in her welcome speech did Sabiha Mahmood, an Angel or perhaps a Devil from our college triggered the spirit of Umang’14.

The Governing Body of the Bhawanipur Education Society College, along with the Chief Guest for the day Dr. Kusum Khemani was invited upon stage. Dr. Khemani was asked to light the ceremonial lamp so as to officially inaugurate what is one of the most glamorous fests in Kolkata. Dr. Khemani gave her view and description as to how she felt as she saw a sea of students striving for a common goal. And the compliments and advice given were well received me Prof. Dilip Shah. The crowd was mesmerized by the inaugural classical dance performed by the students of the host college. Organizing members of Umang were called upon and praised for their perseverance. The strength begot from the flames of ceremonial lamp has not once flickered since its inception and we hope throughout the ages will the spirit of Umang carry on. 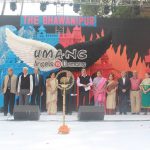 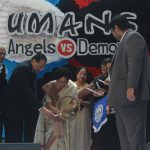 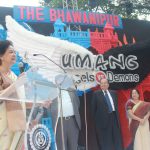 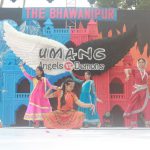 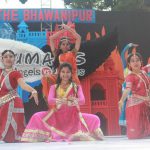 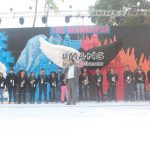