On the 3rd of March, 2019, the Department of English of The Bhawanipur Education Society College organised a field trip as a part of the year-long seminar titled ‘Re-thinking Romanticism’. The objective of the visit was to acquaint the second year students of undergraduate and postgraduate courses with sites of colonial heritage in order to familiarize them with the historical link between England and Kolkata, erstwhile Calcutta. The students visited four heritage sites: South Park Street Cemetery, St. John’s Church, Botanical Gardens and St. Paul’s Cathedral.

The journey commenced with the visit to South Park Street Cemetery which is one of the oldest cemeteries in Kolkata that does not stand connected to a church. The eight-acre necropolis protects an eclectic mix of tombs, cenotaphs and mausoleums. Few of the graves there belong to several prominent figures including Henry Louis Vivian Derozio(an Indian poet and one of the first Indian educators to disseminate Western learning among the youth of Bengal), Major-General Charles Stuart (also known as Hindoo Stuart) who was the quarter master of the first European regiment, Sir William Jones (founder of the Asiatic Society) and many others. The cemetery no longer welcomes the dead but it still attracts hoards of living visitors to its doors. 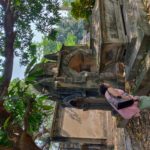 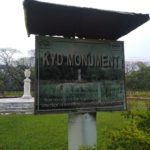 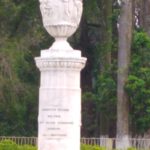 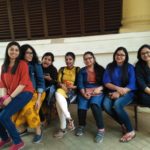 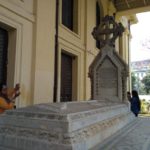 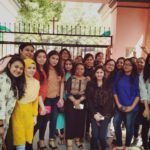 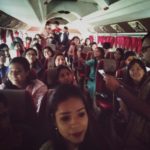 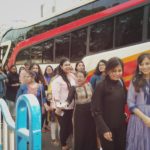 Next, the students were escorted to St. John’s Church which used to be known as St. John’s Cathedral, erected under the aegis of the East India Company. The land where the church stands today was donated by the Maharaja NaboKishen Bahadur, the founder of the Shovabazar Raj Family.It is a grand, imposing structure built in the Neoclassical architectural style with a combination of brick and stone that has earned the vernacular nickname ‘PathureGirja’ (Stone Church). Inside the premises of the church, the students came across Job Charnock’s Mausoleum, Lady Canning’s Memorial and the Black Hole Monument built by one of the survivors of the Black Hole Tragedy that occurred during the seize of Calcutta when NawabSirajud-Daulah took 146 British prisoners and confined them in a 14 feet by 8 feet room for three days, in conditions that took many lives. This octagonal obelisk-styled memorial that commemorates the tragedy and the deceased prisoners was constructed by John Howell, a survivor of the catastrophe who later became the Governor of Bengal. One of the most famous pieces of art that the students came upon within the church is the painting of The Last Supperby Johann Zoffany. The painting has a particularly unique feature in the way Zoffany added a local Indian flavour to his canvas by painting a spittoon, Bisti (goatskin water bag) and an Indian sword which represents a common peon’s talwar.

The journey proceeded to the Botanical Gardens established in 1786 by Colonel Alexander Kyd who was an army officer of the British East India Company. The primary impetus behind the creation of this magnificent garden was to identify and grow plants of commercial value that could be used for trade. The Great Banyan Tree which is reckoned to be the largest banyan tree in the world is also located in the Botanical Gardens in Shibpur, Howrah. It also accommodates a variety of flora such as orchids, cacti, bamboo and palus which accounts for its natural richness.
The excursion concluded with a visit to the St. Paul’s Cathedral noted for its Gothic architecture. In addition to being the largest cathedral in Kolkata, it is also the first cathedral of Anglican background that was built overseas in the British empire. Following the damages it faced during a massive earthquake, the church was reconstructed in the Indo-Gothic architectural style.
The trip provided the students with the opportunity to take a closer look at their immediate environment and investigate the relics of the past to comprehend how the occident and orient came to interact with one another during many years of trade and colonisation. The experience was enriching for the students as they gained an insight into the importance of Romanticism in the fields of literature, art, architecture and philosophy keeping in mind the history of contemporary India.