Kolkata is a metropolis that is more than three hundred years old.

Three eventful centuries that has seen people from all parts of the world bring their different faiths to the city, even as they helped shape her unique – some say peerless – persona. However, hemmed in as we are by the sheer travails of existence, we seldom have the time (or the opportunity, even desire perhaps) to connect with this rich tradition, to reach out and relate to these influences that help shape us into what we are, give our thoughts the food that they munch on.

To address this issue and help the students reach back to their heritage to better understand the finer nuances of the melting pot of cultures that the city is, a Heritage walk was organised by BESC.

The walk was led by Rangan Datta – management and mathematics teacher by profession and travel writer by passion. 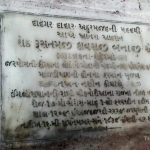 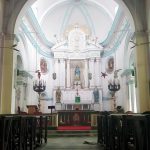 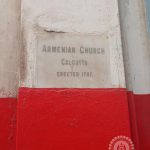 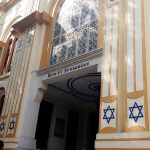 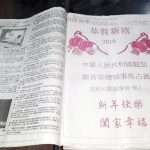 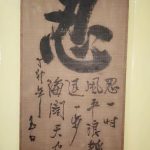 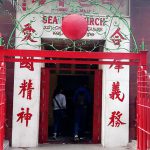 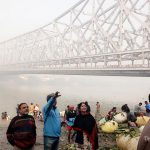 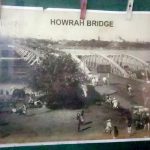 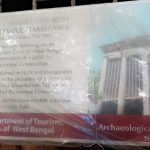 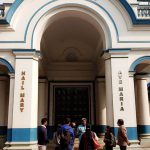 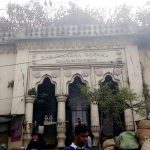 He is one of the most diligent (and celebrated) students of the city’s past and has been a regular contributor to various publications apart from collaborating in different academic projects under some of the leading institutions of the world.

The students of the college participating in the knowledge walk was led by Prof Dilip Shah, the Dean of Student Affairs of the Bhawanipur Education Society College (BESC).

The walk started at the morning flower market situated in the base of the Howrah Bridge – one of the biggest wholesale flower markets of its kind in these parts of the world.

It is affiliated to the Mother See of Holy Etchmiadzin of the Armenian Apostolic Church. It was built in 1724 on the old cemetery of the Armenian community and is located in the northwest corner of Barabazar in the Central Kolkata.

The group then moved on to visit the Cathedral of the Most Holy Rosary, commonly known as the “Portuguese Church in Kolkata”, is the cathedral of the Roman Catholic Archdiocese of Calcutta.

The cathedral has a decorated pediment, flanked on either side by two domed towers and an extended portico with arched entrance way.

The interior contains beautiful sculptures including 14 Stations of the Cross. Behind the altar, there are the figures of Madonna and Child.

The remains of the first Archbishop of Calcutta lie below the altar.

Members of the Heritage Walk was also made aware of the history of the sacred place.

It was stated how after Job Charnock founded the city of Kolkata in 1690, the Portuguese from Hooghly had settled in the new town.

It was they, who constructed a chapel and were attended by Augustinian priests. The Cathedral was founded in 1797.

In 1799, the chapel was replaced by the church which is used today as the cathedral.

It was the main Church of the Padroado in Kolkata till 1834, when it became the first parish Church of the newly erected Vicariate Apostolic of Bengal.

The Salesians took over charge from the Jesuits in 1921 and they, in turn, handed it over to the diocesan clergy in 1972. In 1979, the cathedral annexe was constructed.

The procession then winded its way to the Magen David, or the Shield of David, Synagogue located at the junction of Brabourne Road and Canning Street. Magen David is the second operating synagogue in Kolkata, the other being the Beth El Synagogue at Pollock Street.

The synagogue was built in 1884 by Elias David Ezra in memory of his father David Joseph Ezra, who made his fortune in the real estate trade of Kolkata.

Elias David Joseph Ezra is associated with some of the heritage buildings of Kolkata including Esplanade Mansion, Ezra Mansion and Chowringhee Mansion.

Ezra Street is also named after him.

The synagogue is built in the Italian Renaissance style with a brick red finish.

The Magen David Synagogue is approached through an arched door, containing the hexagonal “Star of David” and
Hebrew inscription.

The two side walls contain memorial plaques dedicated to the well-known Jews of Kolkata.

Although the services of the Magen David Synagogue have long stopped but the interior are astonishingly well maintained.

The altar of the Magen David Synagogue is crowned with an Apse (Half Dome) studded with stars representing the heaven.

The large plaque in the middle contain the “Ten Commandments.” It also contains several other Hebrew inscriptions along with many items of Jewish Iconography, including the seven- branched lamp stand of Menorah.

High above the wall opposite the altar is a beautiful circular stained-glass piece.

At the centre of the hall is a raised podium from where the Rabbi preached.

Two sets of stairs from either side of the hall leads to the upper balconies, which used to be reserved for women.

The tour then walked to the Beth El Synagogue which was set up in 1856 and literally means the House of God.

It is located stone’s throw away from the Magen David Synagogue on Pollock Street.

The Beth El Synagogue is approached by a flight of marble stairs topped with an arched stained glass and finally crowned with a clock.

The pale-yellow facade of the Bethel Synagogue is complete with Jewish iconography of the hexagonal “Star of David” and the seven-pointed candle stand of “Menorah.”

The Parsi Fire Temple was next on the agenda.

A fire temple in Zoroastrianism is the place of worship for Zoroastrians, often called dar-e mehr or agiyari.

In the Zoroastrian religion, fire (atar), together with clean water (aban), are agents of ritual purity.

Clean, white “ash for the purification ceremonies [is] regarded as the basis of ritual life”, which “are essentially the rites proper to the tending of a domestic fire, for the temple [fire] is that of the hearth fire raised to a new solemnity”.
For, one “who sacrifices unto fire with fuel in his hand …, is given happiness”.

Moving on the Chinese Temples were visited.

The Chinese temples are sacred sites for the practice of Chinese folk religion. Kolkata has a significant population of Indian nationals of Chinese ethnic origin (immigrants and their descendants that emigrated from China starting in the late 18th century to work at the Kolkata port as well as the Chennai port).

Most of the Chinese population live in or near Tangra, though the Ezra Street region in Central Kolkata is known as their original lair an area that is dotted with different landmarks that bear testimony to their once vibrant presence.

The Chinese had brought with them their culture and at least eight of the Chinese temples are located in the old Chinatown around Tiretta Bazar in Central Kolkata.

Though the places of worship are referred to as “churches”, they are sites of veneration that adhere to Chinese traditional religion and have nothing to do with Christianity.

Sea Ip Church and Tong On Church were called upon – little oases of Chinese Culture and deep spirituality that stands diffident in the sea of hustle and bustle around them.

Many of us profess to know our city.

Some of us even know where Chattawalla Guli is (Tiretta Bazar of Central Calcutta behind Poddar Court), but very few know of an elegant two storied building on the road whose ground floor once housed the Nanking Restaurant.

Opened in 1924 the Nanking Restaurant is the oldest Chinese restaurant in Calcutta (Kolkata) and also in India.

The first floor houses the Tong On Chinese Temple.

The final port of call was the Myanmar (Burma) Buddhist Temple, located on 10A, Eden Hospital Road, next to the horse mounted statue of Rana Pratap, just off the Central Avenue.

The two boards on the nondescript three storied building are the only evidence of the Myanmar (Burma) Buddhist
Temple in Kolkata (Calcutta).

The Temple was established in 1928 by U San Min.

It was called the Burma Buddhist Dharmasala which later came to be known as the Myanmar Buddhist Temple.

Today the shrine is located on the top floor of the building.

“I am both ashamed and ecstatic” said one third year student who had participated in the walk “ashamed, as I am now aware about just how little that we know of the city where I have been born and brought up.

Ecstatic because I took this walk, because I go back home knowing just this bit more about the Kolkata we all love.