The Inaugural Session was chaired by Biswajit Chatterjee of Jadavpur University. After the Inaugural Address by Dr Suchandra Chakravarty, Teacher-in Charge, BESC and the Welcome Address by Dr Ruma Bhattacharyya, Secretary BEA; Prof Sugata Marjit, renowned economist, former Vice Chancellor of the University of Kolkata and Reserve Bank of India Professor of Industrial Economics at the Centre for Studies in Social Sciences, Calcutta (CSSSC) delivered the Keynote Address. 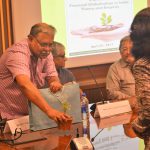 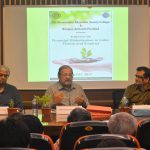 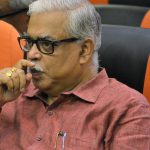 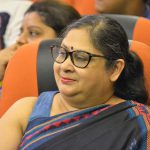 Prof Marjit, dwelled at length on the impact of financial liberalisation and its consequences on asset prices. He explained how capital flows affect Foreign Direct Investments in an economy, with influence on both the debt and equity sectors, ultimately helping bring down the cost of capital with all its attending effects on the economic activities. He also drew parallels between the Indian and the Chinese economic models to highlight his argument and interspersed his speech with myriad examples and quoted the authorities on related matters extensively. The high point of Prof Marjit’s deliberations being the algebraic representation of economic postulations, bringing clarity and adding a dimension of mathematical precision to the points being made.

The crux of his argument was simple – the time for half-hearted measures is long gone and if we are to put the Indian economy in order, address inequalities effectively and pursue the stated agenda of growth, we must open-up – embrace and integrate – so that the real fruits may accrue for the economy to attain its full potential and for future generations of enjoy.

The Keynote was followed by Technical Sessions where papers were contributed.

The post lunch session was witness to a panel discussion on “Demonetisation in India” which was chaired by Prof Suman Mukherjee, Director General of BESC. The session witnessed a spirited discussion in which experts provided the audience with their vantage views from both sides of the Note Ban. Prof Amitava Ray Chaudhuri and Prof Saikat Sinha Roy of Jadavpur University, Prof Kaushik Gupta of Calcutta University and Dr R N Nag of St. Xavier’s College, Kolkata, took part in the deliberations. The fact that much of the dust that was raised by the bolt from the blue has settled, allowed the speakers to be extremely objective about the points being made, which raised the deliberations to an altogether higher plane and was enjoyed by the experts and the audience alike.

Prof Mukherjee conducted the discussion with is characteristic élan and summed up the often-intricate economic thoughts lucidly, bringing the macro and the micro economic mind benders within the grasp of the audience.

The Valedictory Session that followed the panel discussion was chaired by Dr Suchandra Chakravarty of BESC. Prof Biswajit Chatterjee of Jadavpur University was the main speaker. The seminar ended with a Vote of Thanks and the distribution of Certificates.

The ability of the organisers – for though, content and execution – was universally appreciated and speakers not only lauded the effort but also hoped that such intellectual pursuits, especially in the field of economics, will be held in more frequent intervals. The efficacy of such events in which the faculty and the students get a chance to hone in their knowledge and understanding of the subject cannot be overemphasised, being the common refrain.

The Bangiya Arthaniti Parishad has uninterruptedly been performing its academic activities in the fields of publication, seminar and conference for close to three decades since its inception in 1980. Prof. Satynendra Nath Sen, the former Vice-Chancellor of Calcutta University, was the founder President of the Parishad.

The Department of Economics, BESC is one of the most vibrant sections of the Institute where the students and members of the faculty are engaged in various academic pursuits that are aimed at stretching the horizons of economics.

Posted in Bhawanipur Bytes, Events.
Share
PreviousTo the MUN and back: BESC organises the 2nd Inter College Assembly of Nations
NextBESC signs MoU with the ICAI