​Dr. Sourav Sengupta, Lecturer, the Indian Statistical Institute, Specializing in Crypto Currency and Bitcoins conducted one of the most memorable seminars held in the college in recent times (and that’s saying a lot, considering the sheer number of seminars that are organised in the BESC). The topic too, was straight out of the world – bitcoins and crypto currencies!

There are trades to be made and monies to be earned. Naturally, BESC was interested, with about a hundred students paying rapt attention as Dr Sourav Sengupta explained the basics – that crypto currencies are a digital currency in which encryption techniques are used to regulate the generation of units of currency and verify the transfer of funds, operating independently of a Central Bank. “Decentralized cryptocurrencies such as bitcoin now provide an outlet for personal wealth that is beyond restriction and confiscation”, apart from providing an infinite amount of scope to trade and create wealth, literally in the no-where land of the net. 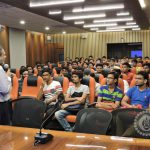 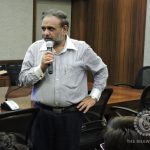 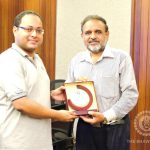 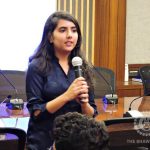 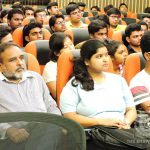 He also elaborated about trading strategies and explained as to how exactly to invest in Bitcoins going into the details about their efficacy and explaining as to why they hold the kind of potential that they are being credited with.

Cryptocurrencies, it is widely expected, will be permitted into the Indian economic scenario sooner than later and as is the norm, BESC students are gearing up for the inevitable, to be the first off their marks when it happens. The seminar, as one student pointed out, was just the first step towards that inevitable situation.

Prof Dilip Shah, the Dean of student affairs and an acknowledged expert in all things financial (and especially the markets that deal with them) summed up the proceedings with his usual lucidity, clearing whatever doubts that the participants may have had.

The event was organised by student volunteers Divya Sharma and Sumangal Pugalia. This report has been filed by Deblina Mukherjee with camera persons Shagun Lunia and Mayank Kashyap of the Expressions collective of the BESC.

Posted in Events.
Share
PreviousTo Sir, with Love
NextAccounts in the Mount of Olympia