500 plus students, the entire Board of Trustees and all the senior teachers holding hands to take the solemn pledge to donate blood; putting their hands on their hearts as they sang the National Anthem to reiterate the promise – one doesn’t get to witness such events in a hurry, going even by the Bhawanipur Education Society College (BESC) standards.

That is exactly how BESC flagged off its Blood Donation drive.
By the time the camp ended, more than 700 units of blood were donated voluntarily, which roughly translates upto 2100 lives saved! Yes, it is certainly a record of sorts – in terms of number of units collected in a single day in an educational institution.

For most of the donors, it was a first-time experience, something that they will not only cherish, but also replicate in the years to come.

The fact that the nearest, any institution has reached, anywhere this feat was BESC in 2016, which speaks for itself. 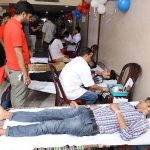 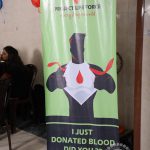 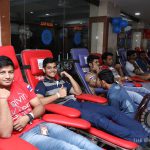 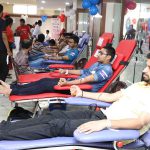 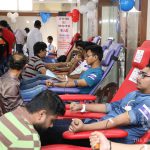 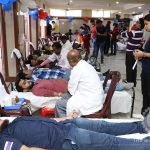 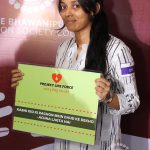 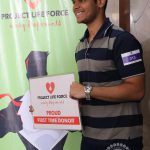 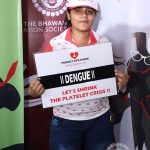 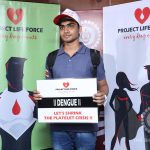 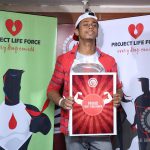 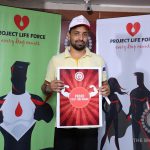 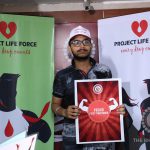 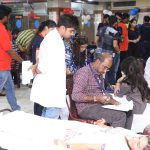 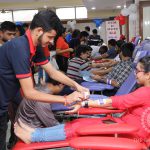 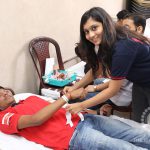 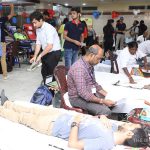 Like they say, when it comes to achievements, BESC’s only competition is BESC itself! Champaklal Doshi, the Chairman and Miraj D Shah, the Vice Chairman of the Management Committee that runs the college lit the ceremonial lamp to inaugurate the proceedings.

Pradip Sett and Naliniben Parekh were present in the occasion along with Prof Suman K Mukherjee – Director General, Prof Dilip Shah – Dean of student affairs and other senior members of the faculty.

Every two seconds someone needs blood.

This is akin to saying that more than 38,000 blood donations are needed every day.

Blood cannot be manufactured – it can only come from generous donors.

The average adult has about 10 units of blood in his / her body.

Roughly 1 unit is given during a donation.

The process of blood donation is totally safe and is often termed as the greatest gift that can be made, for donating blood equals donating life! The Blood Donation Camp was organised by the NSS Team of BESC in association with Project Life Force – blood brothers on a Mission to make West Bengal a Zero blood deficit state and the Lion’s Blood Bank.

“A blood donation camp” said Rishu Bhatia an awe-struck student from Sri Shikshayatan “is always made to look so serious, even grave.

And look how BESC has interpreted it – the festive decoration, the DJ music, the sumptuous spread, the Flash Mobs and the sheer joie de verve – it is a celebration of life, the way it should be. This place Rocks!” A huge round of applause is also due to the students of Sri Shikshayatan College who participated in the camp.

This Report has been filed by Shivam Sinha with camerapersons Sirazuddin, Shreyanshu Mishra, Mayank Kashyap and Siddhant Jha of the Expressions Collective of the BESC.